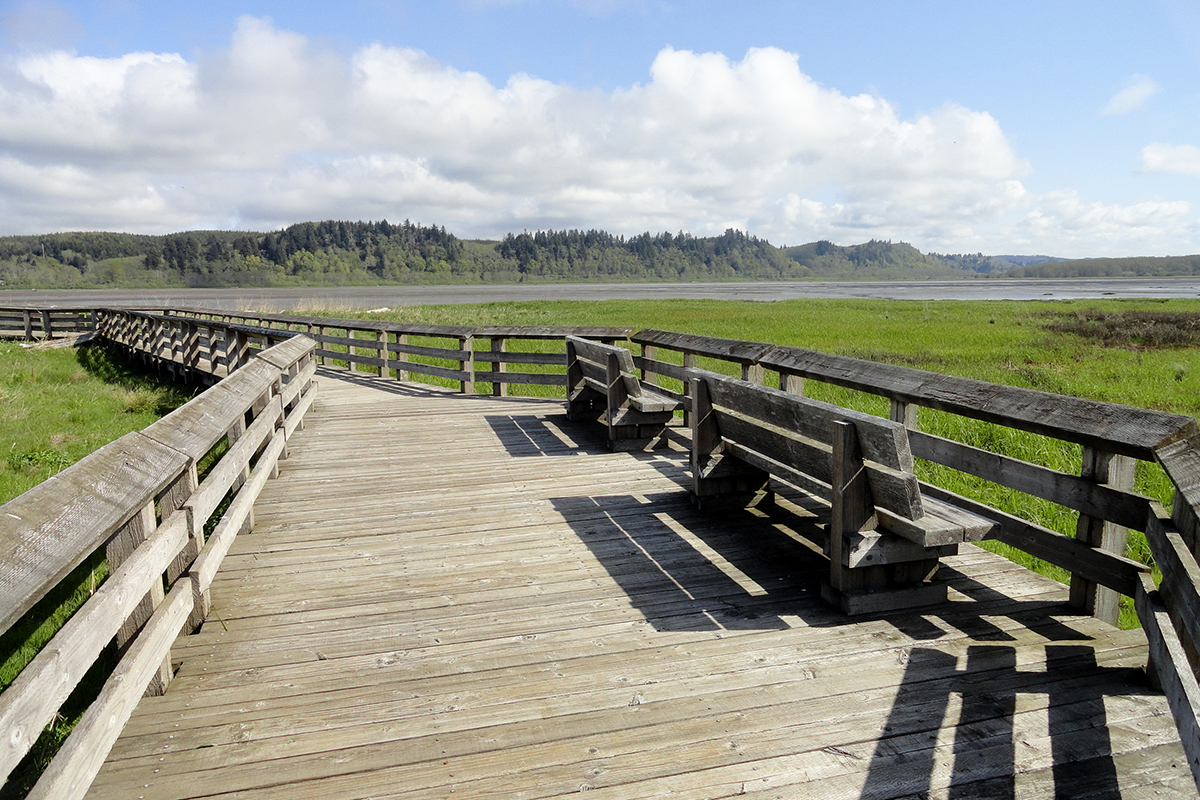 Hiking in Grays Harbor is for the Birds

Article and all photos by Craig Romano

The second largest estuary in Washington State, Grays Harbor is a rich biological ecosystem influenced by the Pacific Ocean, Chehalis River and slew of other minor rivers and sloughs. Home to twin timber cities, Aberdeen and Hoquiam; and the small resorts of Westport and Ocean Shores sitting on two peninsulas at its mouth—Grays Harbor is also the home to one million migrating shorebirds. So significant is Gray Harbor as a stop on the Pacific Flyway, that it has been designated as a Western Hemisphere Shorebird Reserve Network Site. Fall and spring are the time to see some of the two dozen migrating species that make a stop here. And within Grays Harbor’s vast basin there are three exceptional sites to do a little hiking and see a lot of birds.

So significant is Gray Harbor as a stop on the Pacific Flyway, that it has been designated as a Western Hemisphere Shorebird Reserve Network Site."

Grays Harbor National Wildlife Refuge. At only 1500 acres, this refuge occupies just two percent of the intertidal zone of Grays Harbor. But you’ll find up to 50% of the migrating shorebirds here—primarily in the refuge’s Bowerman Basin. You can hike along an extensive boardwalk trail complete with interpretive panels and spotting scopes to catch good glimpses of all the avian activity. Most prominent of the migrating shorebirds are western sandpipers, dunlins, least sandpipers, red knots, semi-palmated plovers, and black bellied plovers. Of course plenty of resident birds can be viewed too. So keep your eyes out for falcons, eagles, harriers, herons and terns.

To reach the refuge, head to the Hoquiam airport and follow Airport way to a parking area. Then walk a gated road .4 mile to the start of the Sandpiper Trail. This nicely built boardwalk (ADA-accessible) traverses thickets of alders and willows before breaking out along the edges of the basin’s extensive mud flats. The way eventually forms a loop jutting out into the sedges, pickleweed, and hairgrass matting the basin—a birding bonanza area. If you forgot your scope, there are a couple of fixed ones at the observation decks. And plan on returning to this area early May for Hoquiam’s annual Shorebird Festival.

Bottle Beach State Park. On Grays Harbor’s south shore not too far from Westport is a small state park that offers big bird watching opportunities. Here off of SR 105 at Milepost 35 is the Bottle Beach State Park Ruby Egbert Natural Area (Discover Pass required; and dogs prohibited). Follow a .7 mile ADA-accessible trail to three observation platforms along 6,000 feet of tide flats within this 75-acre park. Up to 20% of Grays Harbor’s migrating shorebirds use the flats at Bottle Bay for feeding. More than 130 species of birds in all have been observed here. Peregrine falcons are common in the park thanks to abundance of prey available to them.

There are several interpretive plaques along the way to help you better understand this important ecosystem. As you gaze out at the vast undeveloped flats, try to envision this rich wildlife habitat supporting a large deep water port. That was the plan in the late 19th century. But several factors including an economic downturn led to the plan being abandoned and the growing town of Ocosta on these shores to all but fade from the map.

Damon Point in Ocean Shores. The third Grays Harbor birding hot spot is Damon Point in Ocean Shores. Located near Browns Point on the southern end of the resort town, Damon Point was once an island. But thanks to sand accretion (the opposite of erosion) Damon Point has grown to become a spit. You can hike more than 4 miles around this protruding land mass for sweeping views that include Mount Rainier and the snowy Olympic Mountains. And observe scores of shorebirds including endangered snowy plovers. As you hike around the point, contemplate its interesting history. Named for A. O. Damon, who settled here in 1861, the point has grown to connect with Protection Island, creating a spit over 1.5 miles long and 0.5 mile wide. Washington State Parks then built a road up the middle of the spit. But Mother Nature objected, sending a storm to sever the road, and providing an outlet for a newly formed pond. Later another storm removed the rest of the road.

Currently Damon Point consists of 61 acres connected to the mainland—but nature just may change its mind in the future creating an island once again.Aside from looking for migrating shorebirds, Damon Point is a great location for watching eagles and seals too. And during exceptionally cold winters, this is one of the best spots in the state to see wintering snowy owls. The point is dog-friendly, but please keep your buddy leashed to not disturb resident wildlife. And respect all closures. The interior of the point is closed from Mar 1–Sept 15 to protect threatened nesting streaked horned larks and snowy plovers.

Craig Romano is an avid hiker, runner, kayaker, and cyclist. He is the author of several guidebooks on hikes in back country and urban trails throughout the Pacific Northwest. CLICK HERE to preview and order any of his excellent hiking guides.