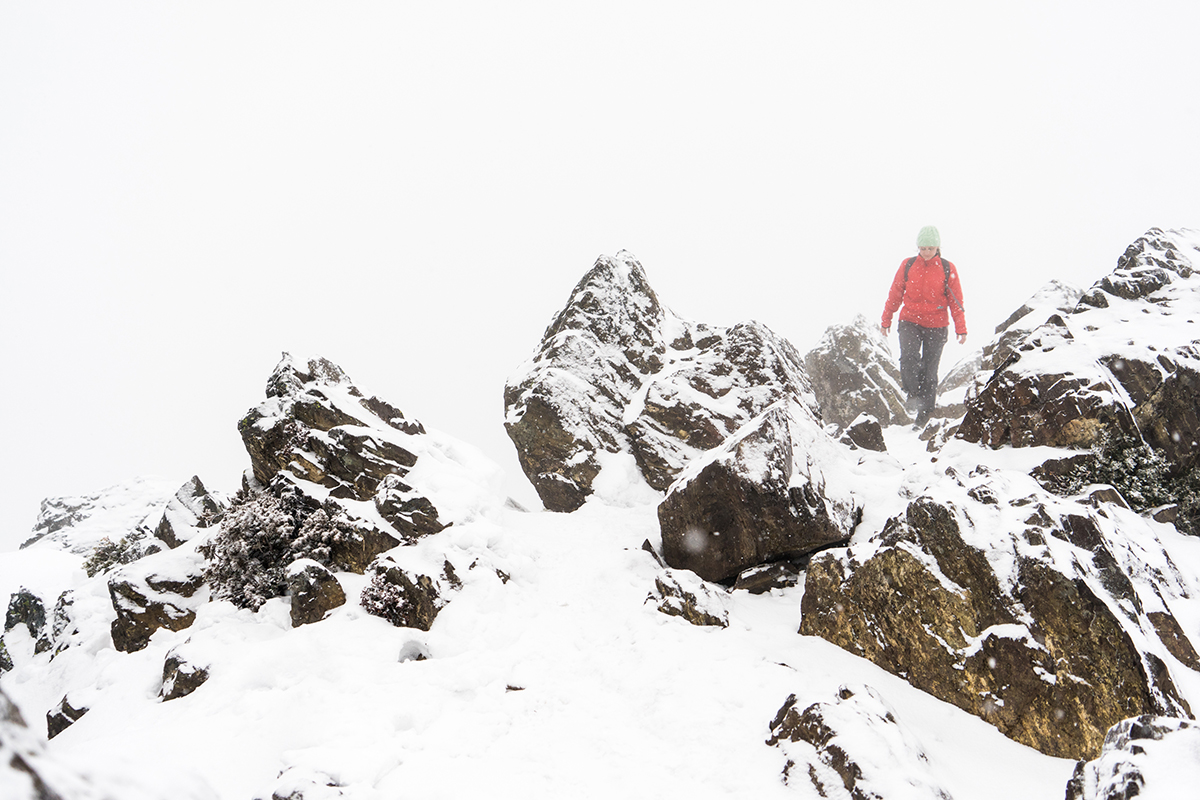 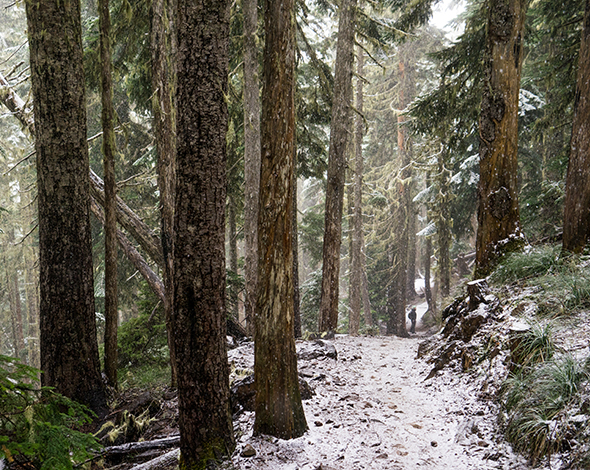 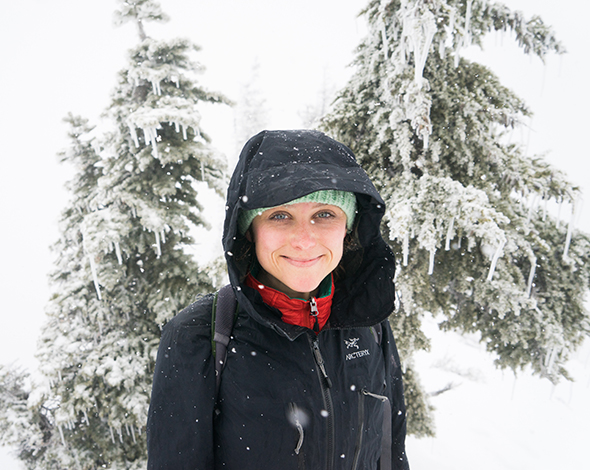 Winter hikes abound on Hood Canal from Mount Ellinor Trail pictured at top to gentler walks along trails running through the dense forests that rise up on the foothills that surround the fjord.

In the last few weeks the Olympic Range has been sporting a new blanket of snow, beckoning visitors to come closer and feel its winter embrace. Explore the peaks or Hood Canal foothills—cast aside the holiday bustle and get to know them better.

Most of this range is protected within the Olympic National Park. This massive park system offers plenty of opportunities for excursions and many of these services are open in the winter.

Why not plan a day trip to the mountains to sample the snow? Take the kids or friends and plan a mountain adventure. Build an igloo, go snowshoeing, or just have a snow ball battle. Although the lower reaches may be drowning in rain, if you head to the hills you might just find a drier, fluffier version. Pack a high protein lunch (such as cheeses, sliced meat and fruit) to keep you going and a thermos of your favorite hot drink to warm you up. If you have a portable camp stove—why not have a high-altitude hotdog roast?

Today, the Olympic Range is considered the most glaciated area in the USA outside of Alaska."

Sea Floor at its Highest Peak 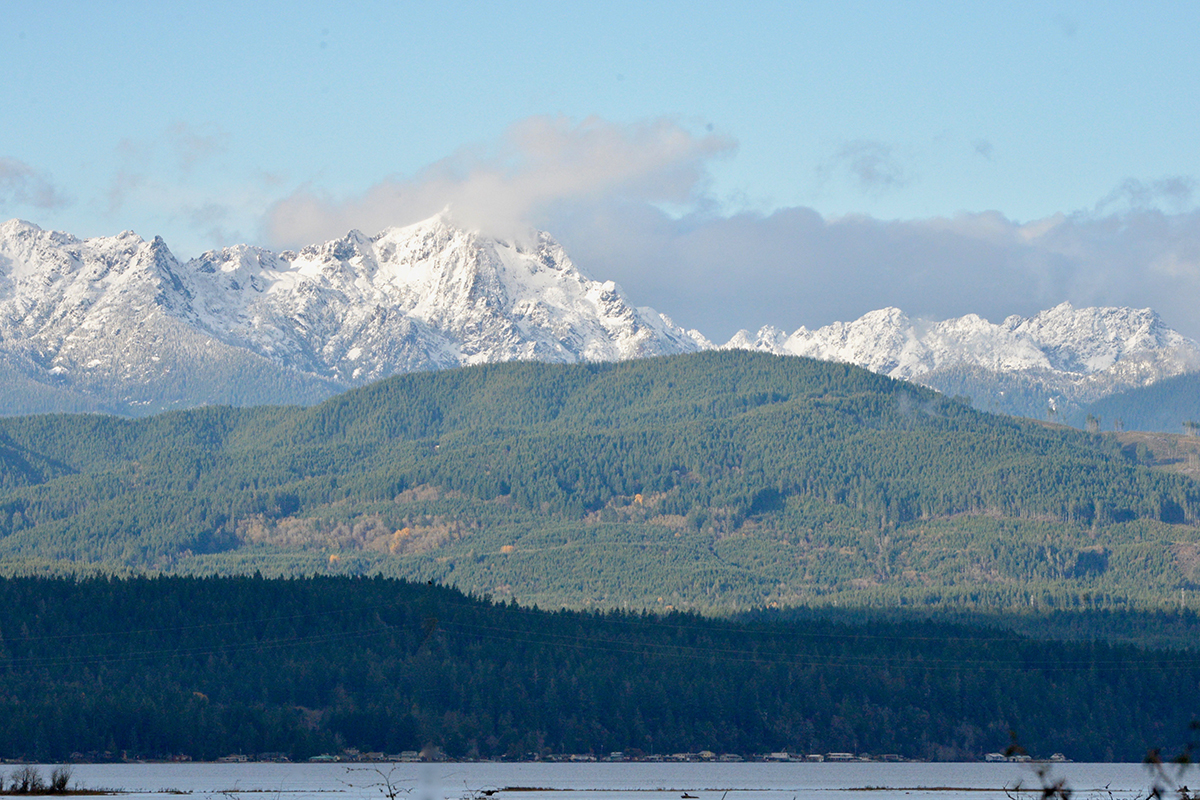 Towering over the Juan de Fuca Strait, the Olympic Mountains are an impressive sight. Although the tallest peak, Mount Olympus, only reaches 7,965 feet, the steep manner they rise from the ocean gives the mountains the illusion of great height.

Despite their jutting appearance, the Olympic Mount Range are not volcanic. This is surprising given the proliferation of volcanic ranges in the Pacific Northwest, for example Mount Baker and Mount Rainier. As evidenced by the marine fossils found in the summits of the range, the Olympic Range once was part of the ocean floor.  Approximately 120 million years ago, the Pacific Tectonic Plate crashed into the North American Plate and created the Olympic Range. The actions of glaciers melting and freezing again created the “glacial horn” appearance of some of the more craggy mountains, a process that is also seen in heights such as Mount Everest and the Matterhorn.

Don't coop yourself up... get out and play! 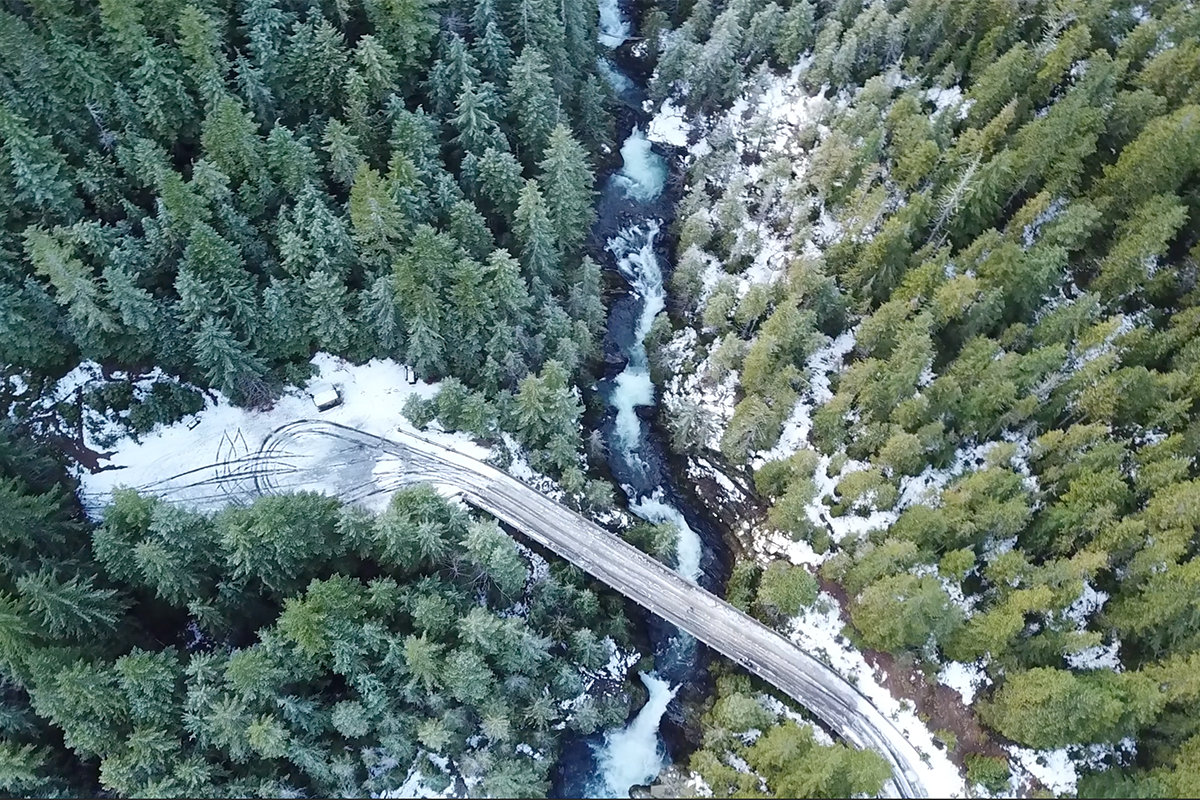 Tire tracks through a fresh snow on the bridge that crosses over Hamma Hamma River.

There is a host of romantic notions about staying inside all winter, putting on fuzzy socks against the cold, and hibernating beneath a blanket. For some, rain grants permission for hours-long Netflix binges. But that’s not what we’re known for in the Pacific Northwest. Instead of letting a little rain stop you, choose adventures that are even better with a little atmosphere! Enjoy having a popular trail all to yourself, and treat yourself for a job well done with dinner in town and a cozy cabin stay.

Situated on the west shore of Hood Canal, Lilliwaup is a small town with a BIG history and a love of shellfish. Peppered with beaches and surrounded by endless hiking trails, Lilliwaup is all about relaxation and rejuvenation. Located in the area is Mike's Beach Resort. One of the oldest and most picturesque resorts in Hood Canal with a unique blend of the rustic look of the Northwest and the relaxed, cozy, and charming chalet style. A dock and mooring buoys as well as rowboats, paddle boat, and a ocean kayak are available for rent and the resort is pet friendly. This is also the home to the Olympic Oyster Co. so you can be sure to enjoy some of the finest oysters on your stay! The Lilliwaup Store and Motel is also a great place to get your fill on locally made Olympic Mountain Ice Cream.

Family owned and operated, the Hama Hama Company has been harvesting oysters and clams on Hood Canal for four generations. Their store and outdoor restaurant, the Oyster Saloon, are located a shell’s-throw from the tide flats. A visit to the farm is the best way to experience Hood Canal oysters in their native habitat. Come during the week to see the shucking crew in action, and ask for one of their self guided tour maps to better explore the farm.

To truly experience Hood Canal’s Winter Embrace, head over to the farm for their Polar Plunge event on New Year’s Day.  All proceeds support a great cause. The Plunge party is from noon to two, with the dunking happening with the high tide at 12:50. On the biggest daytime low tide in the spring, April 20, be sure to head to Hama Hama for the Oyster Rama—a giant tide flat party! 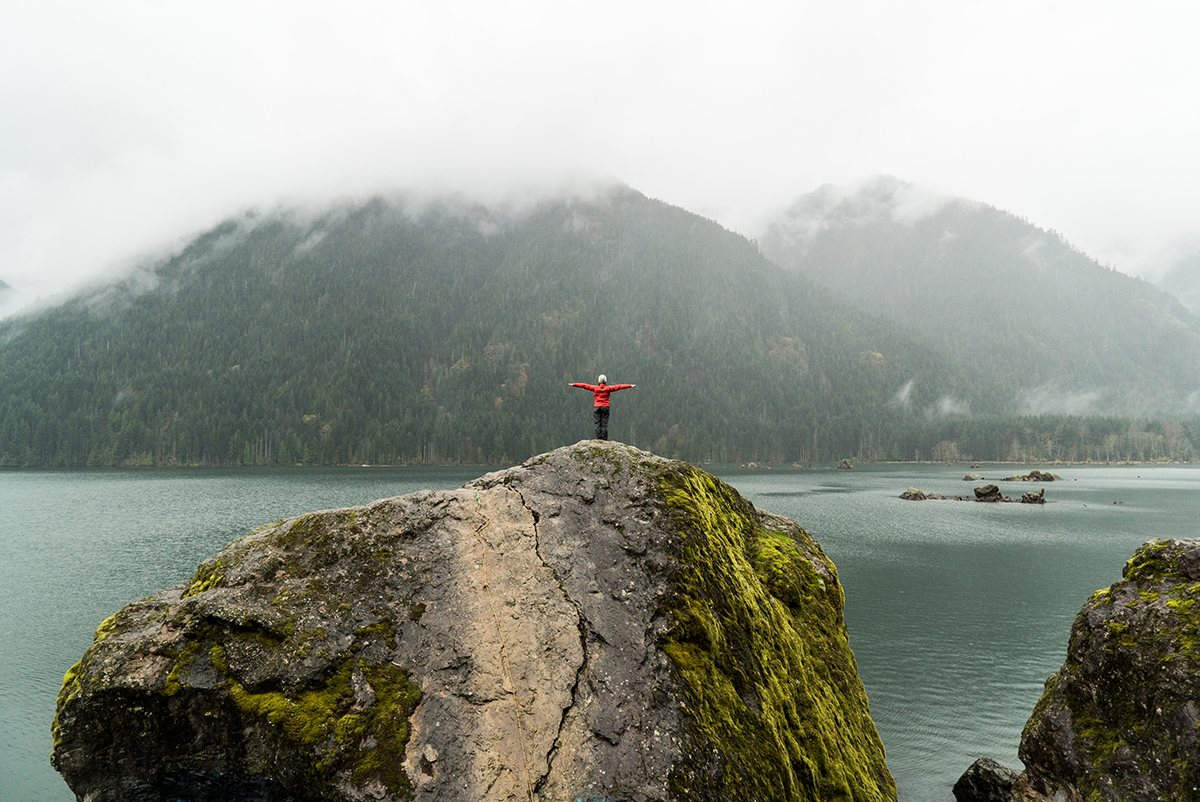 Winter is a great time to experience the solitude of our trails and special places like Lake Cushman (pictured above) near the Staircase entrance to Olympic National Park.

Hoodsport is a seaside town perched on the western shores of the Hood Canal beneath the shadow of the Olympic Range. Here you will find plenty of shops and dining, two wineries: Hoodsport Winery and Stottle Winery; as well as The Hardware Distillery. Using water from the Olympic National Forest, The Hardware Distillery offers a variety of delectable hand crafted spirits and gorgeous view to enjoy while sipping away in their ambient tasting room. Hoodsport also serves as the gateway to the Olympic National Park Staircase Entrance.  At the foot of the hill, heading up to Lake Cushman, stop by the Hoodsport Information Center (N 150 Lake Cushman Rd) for great tips on road/trail conditions; permits and maps and friendly guidance.

The Olympic Mountain views from Union are not to be taken lightly. Here is definitely the best vantage point to view the entire range. On the journey to Union's center, take a moment to admire the historic Dalby Water Wheel and stop in at Cameo Boutique for some great shopping of local items. The restaurant at Robin Hood serves some of the best seafood dishes and hosts live music most weekends.  Both Cameo and Robin Hood offer waterside lodging. In Union check out the Union Country Store (5130 SR 106) for fresh bakery goods and all you need to continue on your adventure. Across the road, on the waterside, 2 Margaritas Restaurant serves Mexican food; while the Union City Market stocks everything from gifts and collectables to homemade candy and fresh oysters!

Since 1913, generations of visitors have enjoyed the rustic, albeit very luxurious, charm of the Alderbrook Resort & Spa, a canal-side retreat on 88 acres, which include an 18-hole golf course. The 77 guest rooms are ideal for a rejuvenating escape, while the 16 cozy cottages are perfect for family fun. Complete with a waterfront restaurant, dock, and saltwater pool and spa, the Resort also offers access to boating from kayak rentals to schooner tours.